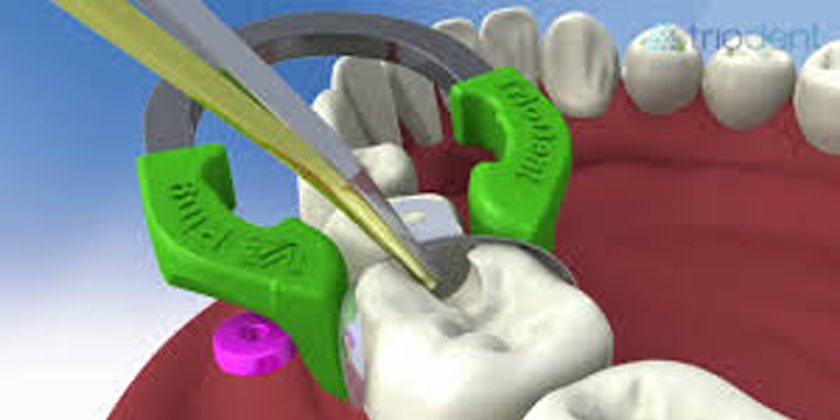 As the dentistry field transitions from the usage of amalgams in favor of composites for direct posterior restorations, one of the greatest challenges dentists face is routinely making excellent proximal contacts. An array of contraptions has been introduced to the marketplace which claims to resolve the issue, but results will often vary. However, there is one product that has assisted dentists greatly, which is a matrix sectional system which utilizes the V or G ring.

How Do V-Rings Work?

These rings are equipped with tines which will engage lingual and facial embrasures, resulting in a wedging force. One problem with G-rings is working with them in conjunction with the wedge (so a matrix can be sealed against a gingival margin for a proximal box). The tines of the G-ring tend to interfere with wedges, or vice versa. V3 rings produced by Triodent are ingenious since rather than using one tine for the production of wedge force, they instead split into the V shape, producing space for wedges through the center.

However, this only scratches the surface of what these devices are capable of. The team at Triodent also designed a matrix which is sectional, as well as contoured anatomically. Inside their kits there are three sizes available, which are molar gingival extensions, premolars and standard molars. Each matrix also contains three small holes which are strategically positioned so that band removal is simple. Dentists will certainly appreciate it, as the contacts are tight. The kit also includes specialized pliers that can be used for engagement with the small holes.

When the matrix sectional bands are removed, they provide solid resistance, which is good since it means a strong contact has been made. The contacts are also broad, as opposed to the point contacts, which are made via standard matrix bands. Also included in the kit will be a wedge which is waved (contoured anatomically) which has a miniature hole designed for pliers that makes removal and placement easy. When V-rings are used in conjunction with Isolite, the results are astounding.

Older restorations can be removed, which will expose the decay. Then the V-ring can be put into place, and then the composite and finally fresh restoration can occur, which may require a small amount of recon touring near line angles. The result is an outstanding contact which is broad. The V-rings made by Triodent also contain ring forceps that work exceedingly well. Overall, V3 rings make posterior Class two composites a whole lot easier, as well as predictable. This results in less stress for the dentist and their patients, and it should be considered a small investment which will bring about huge returns. The V3 ring packs offered by Triodent can be pricey, but are well worth the money when you consider the ease with which it makes dental work and the comfort it will give to patients.